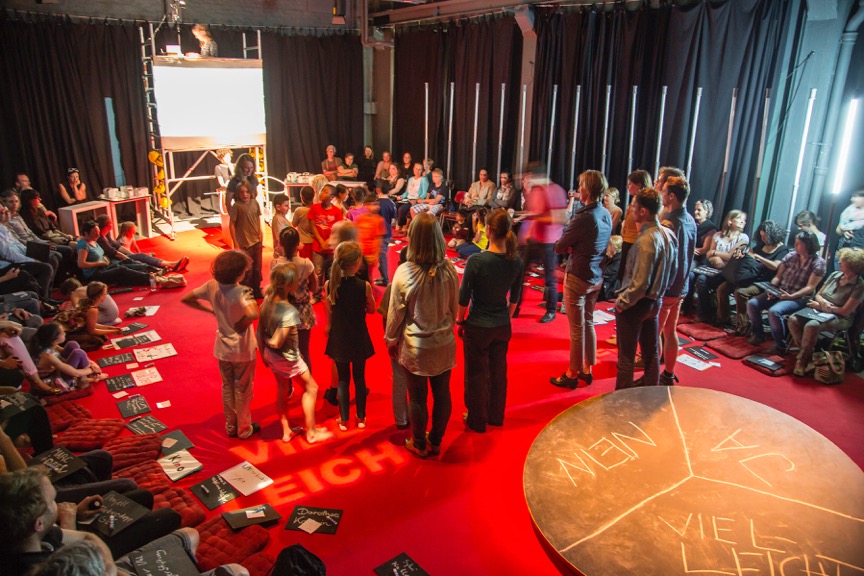 Who actually decides on how our city is designed? And how does this decision work? For the project Yes No Maybe, children developed their ideas for making the public spaces of the neighbourhood Gängeviertel in Hamburg more attractive for children. The open areas of the Gängeviertel, a self-organized housing and culture project in Hamburg, were supposed to be developed and Kowalski intervened into the planning process with ideas of school children (8-9 years old) by setting up the Yes No Maybe assembly. The school class joined the urban planning process. The children’s suggestions were presented to the various actors of that development process – activists from the Gängeviertel project, the architects and city planners in charge – and voted upon in the assembly. For the voting procedure, Kowalski, together with five artists and a school class, developed five different decision-making procedures to vote on the different designs: voting by lights, voting by standing in different fields on the ground, voting with laser pointers, voting with gestures and voting on a unstable decision-making platform (the platform was a round wooden platform that worked like a seesaw and had the words ‘Yes’, ‘No’, and ‘Maybe’ written on it). The Yes No Maybe assembly was the first try-out for the developed voting procedures. To research the performativity of voting procedures, this real decision-making process was chosen. The children’s participation was supposed to be real and they were to be equipped with equal power in the decision-making. Kowalski’s preconception was that to examine a decision-making process, one needs to have real and important decisions to make. The different decision-making procedures were evaluated on the basis of the direct reactions of the participants, such as laughter, questions and comments. It was not only the atmosphere in the process of voting that was important, but also the practicality of the procedures. Through their reactions, the participants showed that the moments of negotiation and reconsideration were crucial.