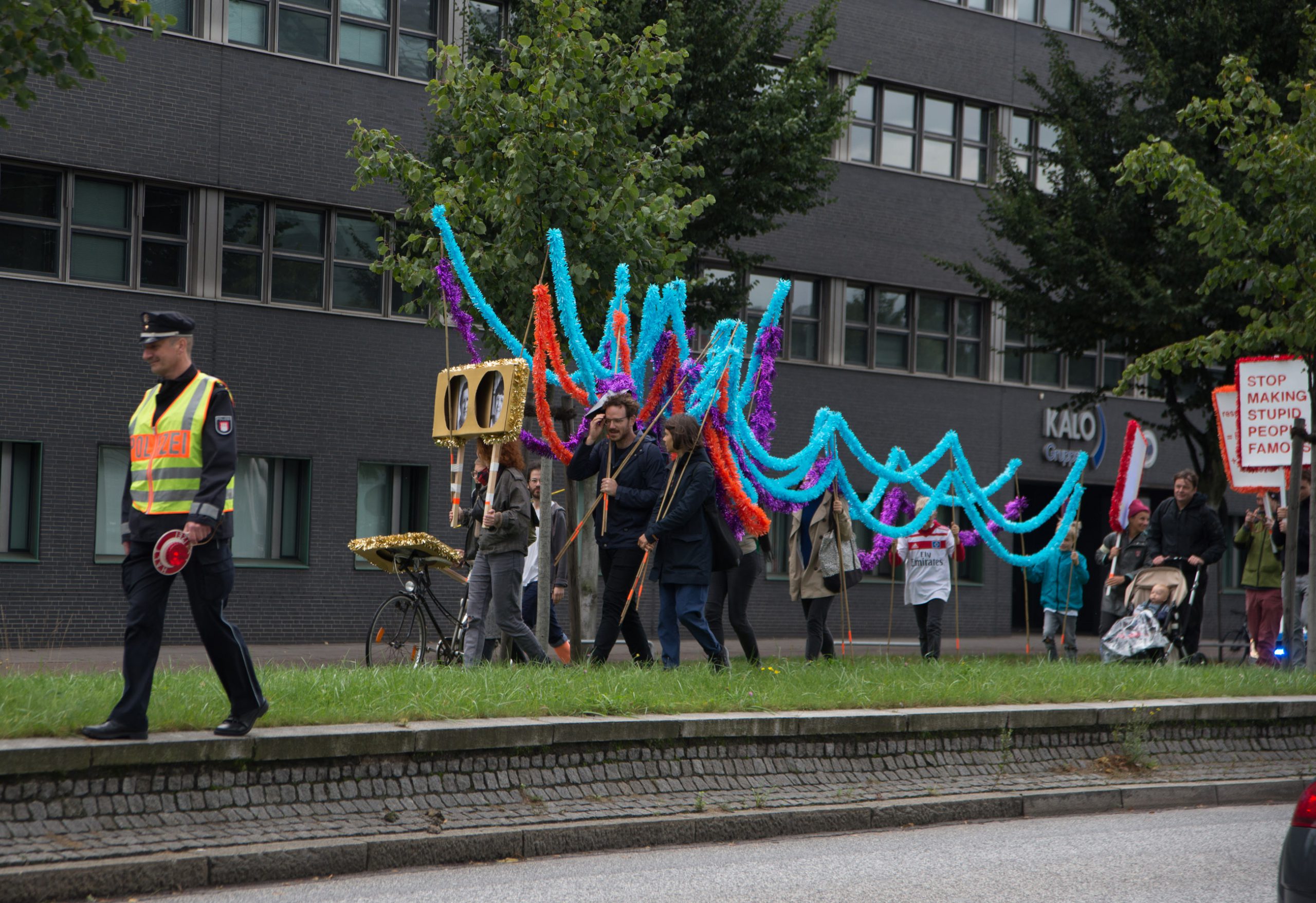 Liz Rech’s second research project is a participatory walking performance in public space. Hello, March! was a hybrid format where performers mingled with the audience within the action. As a parade, Hello, March!! led through the urban area of ​​Hammerbrook, from Berliner Tor to the old power plant Bille along Heidenkampsweg, a multi-lane street. The street name Heidenkampsweg suggests a picturesque natural setting for a walk, an impression that is contradicted by the heavy traffic. The street is dominated by cars and is rarely used by pedestrians. The only natural element that can be found on the Heidenkampsweg is the strip of grass in the middle of the street, dividing the different lanes – Grünstreifen in German.

Hence, the motto of the march was „Das Grüne Streifen“ (“Roaming the Green”). This motto was also a tribute to the promenadologist Lucius Burckhardt, the founder of the science of strolling (strollology), who in 1993 carried out the walk „Das Zebra Streifen“ as a social experiment in Kassel. Hello, March! takes the form of an artistic happening. It consists of running together as a collective experiment in a place where you normally do not run. The march served as a welcoming ceremony, a means of temporarily recapturing public space and experimentally creating temporary collective identities.

The space traversed was changed and marked by the performers and the participants, performing to music and carrying along big colourful objects. The arrival at Bille power plant involved questioning the meaning of the locations: How do the spaces relate to each other and how can their relationship be changed by the collective movement? To prepare, Rech worked on the concept, the preparation of objects, the communications with the police and the application for the demonstration permit; she tested sound equipment and inspected the site with the ‘core group’ of performers, where a very vague spacing was planned. As the audience members were also performers, there was no rehearsal of the overall performance. To deal with the risky research set-up and to create at least a partly safe space, the participants where welcomed at a traffic island and addressed by Rech in an opening talk, where she offered clear rules for the space and the action, explained what was going to happen and when and shared her motivation and interests within her research. Since people did not previously know each other and did not have experiences as a collective, Rech offered different tasks and formed affinity groups, which created confidentiality and allowed people different levels of participation when the march finally started.

Participants: Members of the postgraduate programme Performing Citizenship, friends, visitors from Hallo Festspiele, activists from the Gängeviertel and the Right to the City movement and general theatre audience

Formats: Testing in Performance, Improbable Assembly, Intervention into the Real