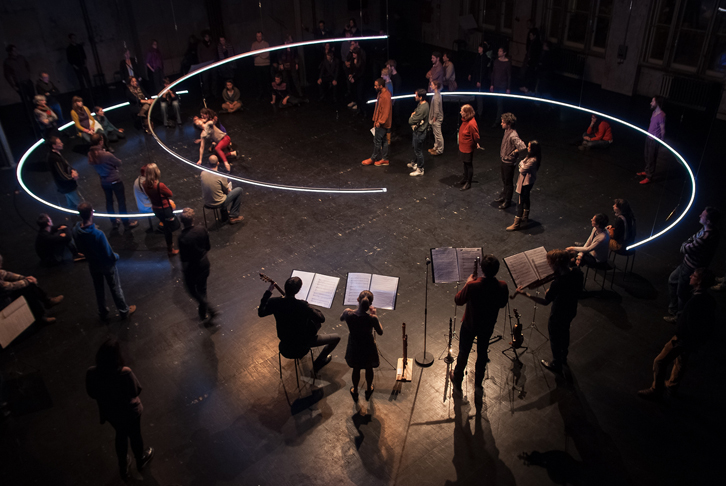 Sebastian Matthias’ art-based research project Danserye was concerned with softening the boundaries between popular dance in club contexts and dance in the hierarchical space of theatre. It formed the starting point of experimenting artistically with choreographic systems that evoke physical movements in the viewer. Prior to researching the club itself, Matthias investigated historical popular dance practices to gain an impression of the functioning of dance movements at parties from a historical perspective. The step from Renaissance dance parties to dance performance was in itself less daring than that from club to stage and could be understood as a preparatory phase for the field research at a later point of his research design.

Thielman Susato’s Musyck Boexken Danserye, a collection of scores for dance music, was created for ballroom dancing events in 1551. During these performance parties, allemandes, galliards and branles were danced on the basis of the treatise. Through the varying constellations of the dances as solos, couples, or groups, roles could switch in a way that participants could be spectators as well as dancing partners. Historically, dancers varied their steps with virtuosity in a skilful musical interpretation and connected with musicians and viewers in a music dance feast.

Following the historical feasts, in Danserye eight musicians and dancers investigated which forms of inclusion and interaction were possible amongst musicians, dancers and viewers. The performers perpetually changed their positionings, focusing on themselves and their interaction with the music, or configuring duets and group constellations, constantly altering their relation to the viewers. As the treatise built the basis for both musical and dancerly material, structures and qualities emerged that are inherent in both art forms. All this took place within an installation developed by visual artists Awst & Walther, which incorporated the visitors and opened up new perspectives within the performance arena. The research process in the creation used methods of PABR while the performances themselves could be seen as tests of the possible interaction among the participants present.

Participants: Guests and audiences at various performances on tour