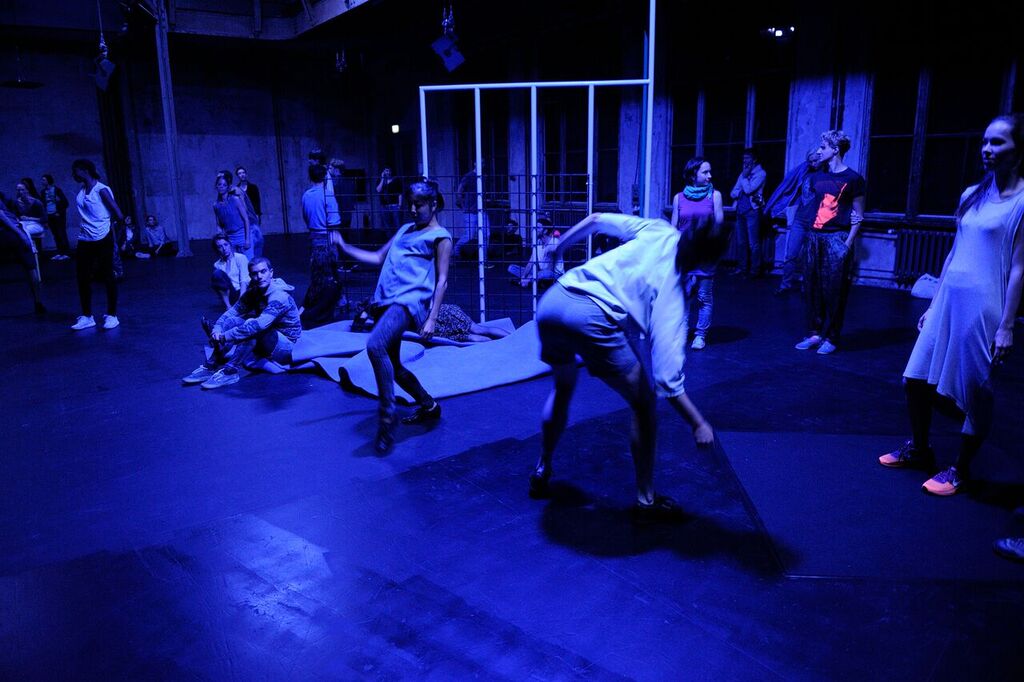 Every single day we are part of a constant urban choreography. Diverse, highly sensitive abilities make it possible for city dwellers to adapt to the various dynamics of our surroundings. The performance series / groove space was an artistic experiment in Berlin (synekism/groove space, 2014), Zurich (maneuvers/groove space, 2014), Freiburg (chorus/groove space, 2015), Jakarta (volution/groove space, 2015) and Tokyo/Düsseldorf (x/groove space, 2016). The organisational principles of club dance identified in Sebastian Matthias’ research on groove were transferred into the performing arts context as choreographic structures. The groove spaces did not illustrate the theoretical findings about clubs, but rather applied the observed dynamics as a choreographic means. They can be literally understood as Testing in Performance as they tried to transfer groove to the theatre. In that attempt, a research question was formulated at the beginning of the artistic creation processes, which– in line with the dynamics on the dance floor of the club – asked how choreographic systems must be designed so that everyone present can support each other through their movements. Hence, groove space investigated how audience movements could also induce movements of the performers. Based on the assumption that groove in dance could only be created within a common spectrum of movement qualities between performers and spectators, Matthias based the choreography and its movement material on the basis of movement categories, which in a theatre space can be found as actions of spectators – such as lingering, wandering around, crossing a room, squeezing into a space between people or bouncing to the music. Since these actions occur very heterogeneously in a theatre space the performance team went to locations in Berlin and the other investigated cities where they suspected to observe groove, dynamic processes and their movement spectra that could be compared to movements of spectators in the theatre space. The research team developed the piece anew in each location, collaborating with new artists and audiences in each city. How must an artistic space be created in order to incorporate all the expertise of the street?

Participants: Guests in the audience groups, audiences in the various performances