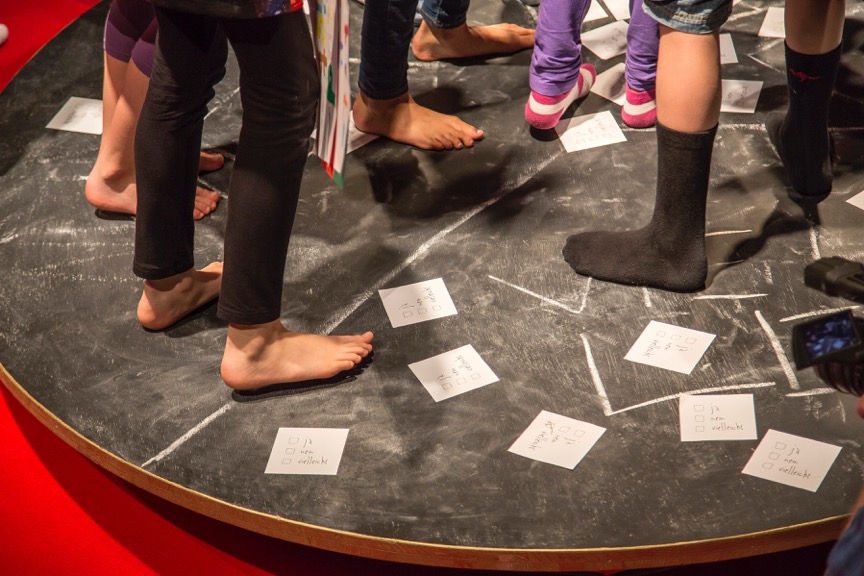 Whether in the Bundestag – the German parliament – or in the classroom, anywhere people live and act together, decisions are constantly being made. Shards of clay, laptops, and shows of hands are just a few of the many media that are used in decision-making.

How do you coordinate individual interests if you want to act together? In most cases, formal decision-making procedures such as the use of ballot papers or hand signals are used to decide this question. The performative elements of these processes are clear and established through continuous use. However, does it make a difference whether you use a ballot or, for example, vote by choosing positions on an unstable platform? And if that is the case, could a theatrical examination of these processes be used to find new decision-making systems that correspond more closely to our current democratic spirit?

One procedure after the other was staged and tested. A questionnaire was added, in which the participants were asked to evaluate the different procedures. The evaluation of the questionnaires showed similar results from her previous findings: The debates and negotiations that were enabled by the different tools where rated as the most important aspects of the procedures. The playful character of the tools made it possible to create an Entscheidungsspielraum (space for decision-making). Making collective decisions was not only about ‘yes’, ‘no’ or ‘maybe’, but about the in-betweens, discussions, negotiations and attempts of persuasion. The evaluation of the interaction and the questionnaire from Playing Decision-Making showed that different tools were linked to specific forms of decision-making.